My local art gallery is currently hosting the most wonderful exhibition, of Impressionist art on loan from the Musee d’Orsay in Paris. Last week I went to see it, and i spent a couple of hours lost in appreciation of over 65 works of exquisite beauty.

Impressionism is a 19th-century art movement characterised by relatively small, thin, yet visible brush strokes, open composition, emphasis on accurate depiction of light in its changing qualities (often accentuating the effects of the passage of time), ordinary subject matter, inclusion of movement as a crucial element of human perception and experience, and unusual visual angles. Impressionism originated with a group of Paris-based artists whose independent exhibitions brought them to prominence during the 1870s and 1880s.

When I see an Impressionist painting I see a depiction of a moment rather than a scene, where the emotion of the artist is as important as what is being depicted. in a sense we are not seeing what they saw, but what they were thinking or feeling when they saw it, a depiction of a mental landscape as much as a physical one. These depictions of light and colour were truly breathtaking,  I’ve selected a few of the pictures to give a cross-section of the exhibition.

Daubigny was not an Impressionist, but his work has been considered a precursor to Impressionism. He was acquainted with both Monet and Cezanne, and he was considered to have had an influence on their work This painting, ‘Snow’, I find to be beautifully bleak. The bare trees in the middle of the snowy field, the birds, the grey sky, all give an air of silence, and cold. You can imagine that you would hear only the wind and the calling of the birds, and even this would be muffled in the snow. It is the dead of winter, and warmth is a distant memory. The eye is drawn to the central tree and its bare branches. Are the birds arriving or leaving? They will find no shelter there. Other than a slight tinge of red in the clouds the picture is virtually monochrome. It is stark and it is bare. I love this.

Oscar-Claude Monet was one of the founders of the Impressionism movement. He was committed to the idea of the artist painting their perceptions of nature rather than merely the image. This painting, ‘A corner of the apartment’, is a marvellous depiction of light and shade. Look at the reflection of light off the floor, interrupted by the shadow cast by the boy. The expertise of this rendered me quite speechless when I saw it. ‘Wow’ (the only word my brain supplied me with at the time) seems hardly adequate. Note the adult figure to the left of the child, barely visible in the shadows. The chandelier at the top is unlit. Is it late afternoon, nearly time to light the lamps? The curtains and plants that frame the picture make the scene almost like a stage set, as if the curtain has just opened on a play, or maybe just about to close. This picture is endlessly interesting. 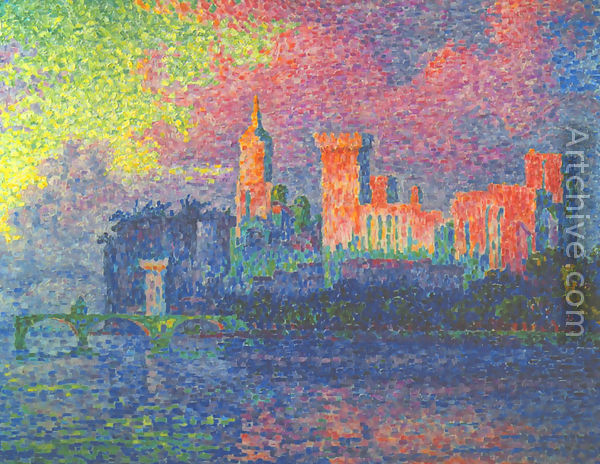 Paul Signac was a neo-Impressionist. Influenced by Georges Seurat, he began to use the technique known as Pointilism, using dots of pure colour which blend in the viewer’s perception rather than on the canvas. It was the colour that first drew my eyes to ‘Palace of the Popes’. The pinks, purples and blues do blend in the eye to indicate sunset. Flecks of pink at the lower part of the painting hint at a watery reflection. Like a photo that’s been blown up too far, this kind of art pixellates on too close observation. But step back and view it as a whole, and you will find beauty.

Camille Pissarro was both an Impressionist and neo-Impressionist painter, and he is noted for being the only artist to show his work at all eight of the Paris Impressionist exhibitions. He was a pivotal figure in the movement and something of a father figure to post-Impressionist such as Cezanne and Van Gogh. I like ‘The Road to Ennery’ because it’s nice. That’s probably not the most exciting description, but I think there’s a lot to be said for peaceful art. Pissarro made a point of painting regular people in their day to day lives, and here you see exactly that, a peaceful country lane with people going about their business. Which way is Ennery, I wonder? Is the man with the sack heading that way, or is it the couple in the cart? Are the women travelling to Ennery, or maybe they’re just on a shorter journey between one farm and the next? It looks like a fine day to be out and about, anyway, and a beautiful country to walk through. Do the people notice the beauty, or are they, like so many of us, too wrapped up in their business to look around them? It’s a soothing picture. 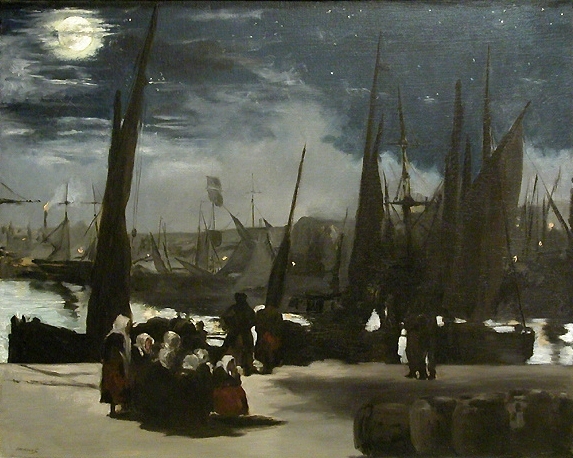 Edouard Manet was not an Impressionist, but he was pivotal in the transition from realism to impressionism by his painting of modern, ‘ordinary’ life. ‘Moonlight over Boulogne Harbour’ is a beautiful work in its depiction of moonlight, clear without it feeling artificial. The boats are merely shadows, an almost ghostly backdrop for the women in the foreground. A few men stand in the shadows, possibly observing the women. It is unclear what the women are doing (working? Waiting for a boat to arrive?) but they do seem to be the main focus of the picture as they are in the best light. i like this because it feels a bit mysterious. The moonlight playing over the women and the water contrasts severely with the shadowy boats and men. What are they waiting for? So many questions.

The exhibition is called ‘Colours of Impressionism’ and will be at the Art Gallery of South Australia until 29 July 2018. If you’re in the vicinity do see it, because it’s wonderful.